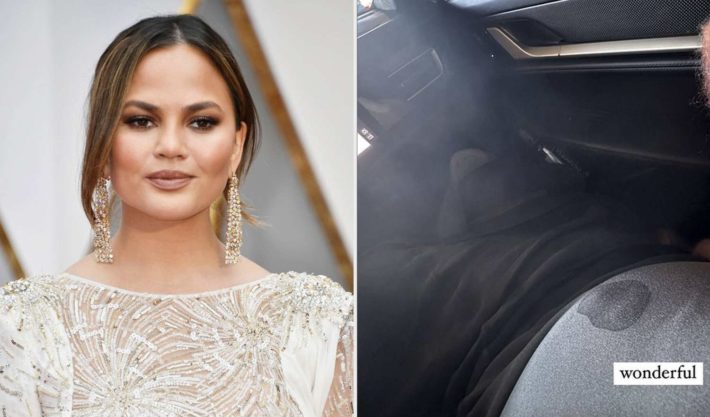 Chrissy Teigen is sharing all the unglamorous details of her postpartum journey.

The Cravings mogul, 37, revealed on Monday that she has to “bandage together” her wound days after giving birth to daughter Esti Maxine, posting a photo to her Instagram Story of what appears to be a stain on her shirt in the car. “Wonderful,” she wrote.

In the first photo she shared of baby Esti earlier this month, Teigen revealed that she had a C-section.

“OMW to bandage together both my wound and 3.8-second clips of Beyoncé performing in Dubai until I get a full HBO special,” Teigen captioned another post.

She posed for the photo in a black mid-length dress, which had spots where she lactated as well as in the middle of her outfit. “My baby: wah,” Teigen wrote in the comments. “Me: learning to edit.”

The cookbook author still managed to look fabulous in a gray fedora, an oversized orange knit cardigan and a pair of tan suede stiletto boots.

Teigen revealed that she had to wear diapers after having a C-section, as she shared the first photo of Esti last week with the baby’s older sister Luna Simone, 6½, and 4½-year-old brother Miles Theodore.

“She’s here! Esti Maxine Stephens – the house is bustling and our family could not be happier,” she started in the caption.

“Daddy sheds nightly tears of joy seeing Luna and Miles so full of love, and I am learning you still need diapers with a c-section!?” Teigen continued. “We are in bliss. Thank you for all the love and well wishes – we feel it all! X.”

John Legend previously announced the birth of their second daughter at a private concert earlier this month, telling the crowd that they welcomed “the little baby this morning.”

“What a blessed day,” he said, adding that he “didn’t get a lot of sleep” but he “feels energized” after spending “a lot of time” at the hospital.

The birth comes after the couple experienced a heartbreaking pregnancy loss in October 2020.

A source told PEOPLE last week that Luna and Miles are “so excited” about their new sibling, explaining that Teigen and Legend, 44, “both really wanted to add another baby to the family. It’s been a long road.”

“Chrissy and the baby are doing well,” the insider said, adding: “It’s such an amazing way for them to start the new year.”

The post Chrissy Teigen Says She Has to ‘Bandage Together’ Her Wound After Daughter Esti Maxine’s Birth [Photo] appeared first on LOVEBSCOTT.