T.I. Addresses Criticism Of His Son King Harris: “We All Got Badass Kids!” [Video] 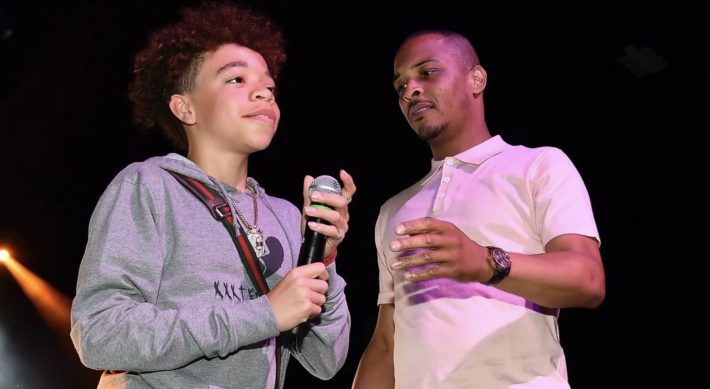 Most of the world was first introduced to King Harris as the elementary school-aged child of T.I. and Tiny on The Family Hustle reality show.

Since then, his formative years have been in the spotlight which means that any and all mistakes he makes are under a microscope.

King Harris has found himself getting in trouble with the law, and also facing backlash for aligning himself with the streets. However, T.I. explained that his son has only acted up because he didn’t want to live off of the success of his parents.

“I have excellent communication with all my kids. I try to listen as much as I speak to them. [King’s] position is, ‘I just don’t want to be celebrities’ kid. I don’t want to live off of y’all’s success. I don’t wanna have to just be in y’all’s shadow,’” Tip told Shannon Sharpe on Club Shay Shay.

“[King] wants a clean slate. I try to tell him he’ll never have that,” T.I. continued. “You were born with it. You can’t give it back… I love him and I understand he has a strong sense of moral standards and integrity.”

Due to King’s actions, T.I. often faces backlash for his parenting skills. Still, he pointed out that he’s absolutely not the only parents who have to deal with their child’s behavioral issues. For any family with more than three children, T.I explained that there’s bound to be at least one child that goes against the grain.

“As much criticism I received about my son, I would like to shed light on the fact – we all got badass kids! They can seem like I’m the only one on here who got badass kids,” he said.

Last year, police arrested King Harris for not wearing his seatbelt in a car. However, Tip addressed the situation, claiming his son will be locked up if his behavior doesn’t change.

Check the full clip below.

The post T.I. Addresses Criticism Of His Son King Harris: “We All Got Badass Kids!” [Video] appeared first on LOVEBSCOTT.