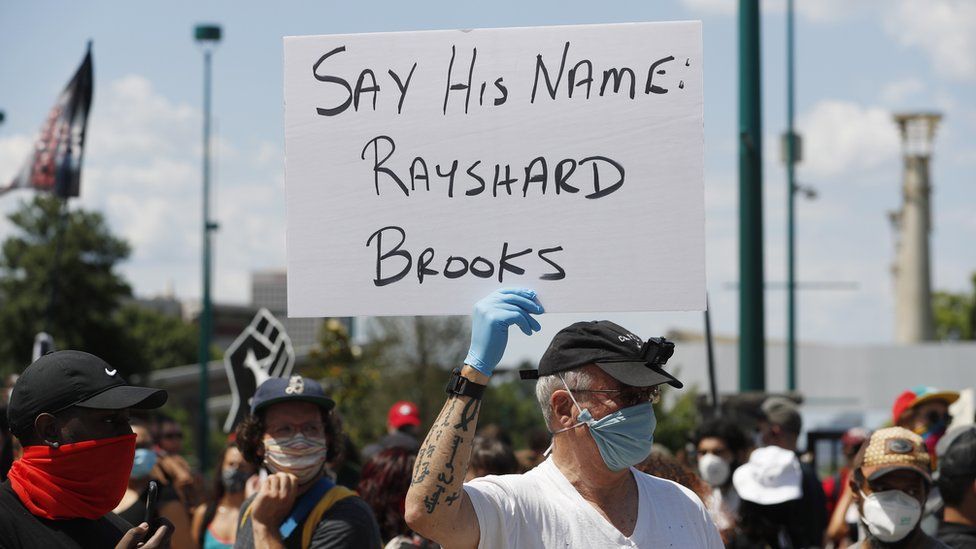 Friday night, we lost a Black man that we didn’t have to lose.  By all accounts, he was literally doing the one thing that wasn’t bothering anyone.  He was sleep.  Sleep inside of his car in a Wendy’s parking lot.  Allegedly inebriated.  Sleep nonetheless.  Now, he’s dead.  By now you’ve heard about the death of Rayshard Brooks and have likely no doubt made your mind up about how you feel. The initial news reporting surrounding this incident was horrible, but I’m not here to analyze that.

We’re currently in the midst of one of the most powerful movements in American history.  For the first time, in my lifetime, people are paying attention.  I could analyze whether all of the attention towards Black life – and specifically Black death is genuine, but this isn’t the place for that either.  In all of the analysis of Black death at the hands of white vigilantes and police officers that use excessive force, the response to this most recent Black death has been interesting.  Similar to the way many in Black culture have decide “Black Lives Matter” doesn’t apply to ALL Black Lives (LGBTQ+, women, etc), many have decided that this movement and fight we’re in has nothing to do with Rayshard Brooks.  I’ve even heard ‘I believe the police need to be held accountable, but this  Rayshard case is different.’  It’s not different.  Rayshard’s story definitively shows us why we are where we are.

I think the problem with a number of people understanding this Rayshard Brooks story is:

1. You believe that Black people should just listen to the police and comply, without cause. You have been conditioned that we are more violent (all people of all races feel this way) — I say Black because white people (and everybody else) will mouth off, charge, disagree, yell and curse at them.

2. You have only seen one video. One perspective. Read one article. The police were talking to Rayshard for 28 minutes without incident. It’s not a crime to be sleep. As we’ve been telling you, it’s deterimental to call the police on Black people, especially when there’s no danger. When this is done, danger magically appears. You can still think what you think. Know that perspective enhances.

3. The sobriety test. The safest place for a person that is inebriated is a parked car, even if it’s in the way. Criminalization ensues when someone is tested without cause. While there are technicalities in anything, driving under the influence is what is dangerous. Lethal in many cases. This man should’ve moved his car and went back to sleep or called someone to come get him. He should’ve never been tested.

4. The scuffle. After being cordial and having a conversation for 28 minutes, taking a sobriety test and of course failing, the police move to make an arrest. Visibly flustered, it’s no surprise that he didn’t want to be arrested (as we now know additional details — based on his own YouTube videos) because he was on probation.

I believe that true rage entered both police officers when they attempted to tase him and he snatched it. I don’t know what I would do if somebody attempted to tase me, but if I knew, that drunk, I had the ability to stop it — I would have. He didn’t intend to harm the officers and even an attempt to tase an officer is a non-lethal response. Where most will feel (again, I believe this is conditioning) he was in the wrong — he “fled.”

I am not of the belief that he was wrong though. What lethal crime (because we all know public intoxication is enough for an arrest) did this man commit? Why shoot and not chase? Where was the threat? Often the response (for those that don’t follow police brutality cases closely) is that the officer “feared for their life” just standing next to a Black man. This one was running away. Drunk. To whom was he threatening? For why did the officer shoot?

This was unnecessary force. You know it. I know it. The city knows it. There wasn’t a weapon. This wasn’t a crime scene.

But you, still feel “he shouldn’t have ran.”
You feel like “he’d be alive.”
You are still biased. You believe the system was built to protect Black. But it wasn’t. It was never designed to serve and protect all. It was literally designed to police runaway property. It isn’t broken, it’s just wrong. Rayshard was shot because he’s still considered property. Like your Black body and mine. Your neighbors. Your Black child’s. There was nothing that justified this death.

Rayshard’s death iss the reason we’re protesting. History tells us, either way he was screwed.

Biden calls for police reform, spotlights ‘The Talk’ at State of the Union: ‘Do something!’

At the end of the day, Kyrie Irving made a smart business decision in requesting a trade

Now that Chris Brown has apologized (in his own way) for dismissing Robert Glasper’s Best R&B Album win, I hope he calls up Glasper and tries to get in the studio with him

Black History Month’s theme this year is Black Resistance. Here’s why it matters more than ever.